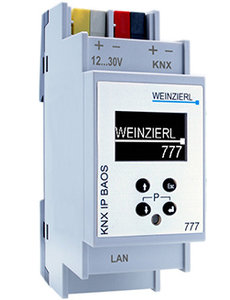 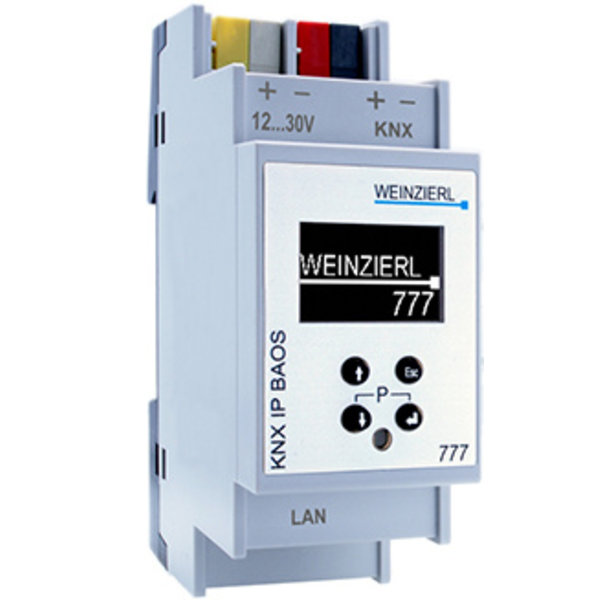 Read or write a review

Unit price: €380,80
The KNX IP BAOS 777 is a powerful universal device for KNX installation: Thanks to the integrated web server, the device enables the visualization and control of buildings, rooms and functions in a standard web browser on a PC or mobile devices such as sm Read more

The KNX IP BAOS 777 is a powerful universal device for KNX installation: Thanks to the integrated web server, the device enables the visualization and control of buildings, rooms and functions in a standard web browser on a PC or mobile devices such as smartphones and tablets.

The new, integrated e-mail function allows individual notification of several recipients, e.g. in case of status changes or an alarm. The integration of a Date & Time Server (NTP) makes it possible to obtain the date and time automatically via the Internet and to synchronize one's own KNX installation. Extensive time functions allow the realisation of a powerful KNX time switch with weekly function.

The configuration is done exclusively with the ETS software - no extra software or tool is required.

The device also offers the function of a KNX IP interface (KNXnet/IP), for example as a programming interface for the ETS. Developers can access all functions via an API with BAOS RESTful Web Services. This allows the device to be used as an application-specific gateway, connecting the KNX bus to the existing IP infrastructure.

The KNX IP BAOS 777 has an integrated web server that allows access to the visualization and device settings via a web browser. The modern interface of the visualization allows the control of the entire KNX installation divided into the individual rooms and functions.

The configuration is done easily and consistently via the parameter dialogues of the ETS. The visualization is generated dynamically and automatically in the device after each download via the bus or network. No additional tool or app is required.

The newly designed user interface of the device (free download of the latest firmware) is not only visually refreshed, but also offers numerous new functions. For example, alarms are now displayed via the animated function icons as well as via notification icons in the main view of the visualization.

Also new: a filter function allows quick and targeted finding of individual functions and timers in the installation.